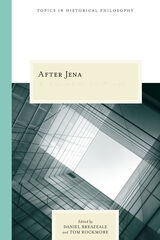 The career of J. G. Fichte, a central figure in German idealism and in the history of philosophy, divides into two distinct phases: the first period, in which he occupied the chair of critical philosophy at the University of Jena (1794-1799); and the following period, after he left Jena for Berlin. Due in part to the inaccessibility of the German texts, Fichte scholarship in the English-speaking world has tended to focus on the Jena period, neglecting the development of this major thinker's mature development. The essays collected in this book begin to correct this imbalance. Concerned in a variety of ways with Fichte's post-Jena philosophy, these essays by distinguished and emerging scholars demonstrate the depth and breadth of Fichte scholarship being done in English.

With an introduction that locates the essays in philosophical and historical terms, the book divides into three related categories: Fichte’s development, his view of religion, and other aspects of his "popular" (or not-so-popular) philosophy. From a wide range of perspectives, the essays show how Fichte’s later development reflects the philosophical concerns of his time, the specific debates in which he engaged, and the complex events of his philosophical career.

Tom Rockmore is professor of philosophy at Duquesne University. He is the author of many books, most recently Kant and Idealism.

Daniel Breazeale is professor of philosophy at the University of Kentucky.

Structures of Imagination in Fichte's Wissenschaftslehre 1794-1795 and 1804
Violetta L. Waibel

Thinking and Willing in the Later Fichte
Gunter Zoller

Toward or Away from Schelling?
On the Thematic Shift in Fichte's Later Philosophy
Steven Hoeltzel

The Light That Lights the Seeing of the Light
The Second Wissenschaftslehre of 1804
George J. Seidel

How Not to Read Fichte's Anweisung zum seligen Leben (1806):
Against the Mystical Reading
Kevin Zanelotti

The Notion of Being in Fichte's Late Philosophy
Johannes Brachtendorf

Fichte and the Ursprache
Andrew Fiala

"The Logic of Historical Truth":
History and Individuality in Fichte's Later Philosophy of History
Angelic Nuzzo