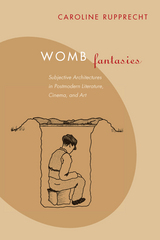 Womb Fantasies examines the womb, an invisible and mysterious space invested with allegorical significance, as a metaphorical space in postwar cinematic and literary texts grappling with the trauma of post-holocaust, postmodern existence. In addition, it examines the representation of visible spaces in the texts in terms of their attribution with womb-like qualities.  The framing of the study historically within the postwar era begins with a discussion of Eero Saarinen’s Womb Chair in the context of the Cold War’s need for safety in light of the threat of nuclear destruction, and ranges over films such as Marguerite Duras’ and Alan Resnais’ film Hiroshima mon amour and Duras’ novel The Vice-Consul, exploring the ways that such cultural texts fantasize the womb as a response to trauma, defined as the compulsive need to return to the site of loss, a place envisioned as both a secure space and a prison. The womb fantasy is linked to the desire to recreate an identity that is new and original but ahistorical.
AUTHOR BIOGRAPHY