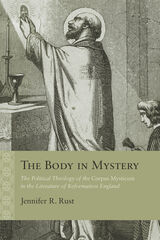 In The Body in Mystery, Jennifer R. Rust engages the political concept of the mystical body of the commonwealth, the corpus mysticum of the medieval church. Rust argues that the communitarian ideal of sacramental sociality had a far longer afterlife than has been previously assumed. Reviving a critical discussion of the German historian Ernst Kantorowicz’s 1957 masterwork, The King’s Two Bodies: A Study in Mediaeval Political Theology, Rust brings to bear the latest scholarship. Her book expands the representation of the corpus mysticum through a range of literary genres as well as religious polemics and political discourses. Rust reclaims the concept as an essential category of social value and historical understanding for the imaginative life of literature from Reformation England. The Body in Mystery provides new ways of appreciating the always rich and sometimes difficult continuities between the secular and sacred in early modern England, and between the premodern and early modern periods.