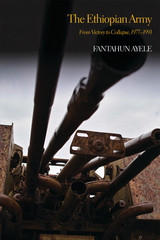 The Ethiopian popular revolution of 1974 ended a monarchy that claimed descent from King Solomon and the Queen of Sheba, and brought to power a military government that created one of the largest and best-equipped armies in Africa. In his panoramic study of the Ethiopian army, Fantahun Ayele draws upon his unprecedented access to Ethiopian Ministry of Defense archives to study the institution that was able to repel the Somali invasion of 1977 and suppress internal uprisings, but collapsed in 1991 under the combined onslaught of armed insurgencies in Eritrea and Tigray. Besides military operations, The Ethiopian Army discusses tactical areas such as training, equipment, intelligence, and logistics, as well as grand strategic choices such as ending the 1953 Ethio-American Mutual Defense Agreement and signing a treaty of military assistance with the Soviet Union. The result sheds considerable light on the military developments that have shaped Ethiopia and the Horn in the twentieth century.

AUTHOR BIOGRAPHY
Fantahun Ayele is an assistant professor of history at Bahir Dar University in Ethiopia. He was the second recipient of the Global Encounters postdoctoral appointment in African Studies at Northwestern University, funded by the Andrew W. Mellon Foundation.
TABLE OF CONTENTS


Acknowledgments
Preface
Introduction
1. Background: The Ethiopian Army 1941–1974
1.1. Organization of the Army
1.2. Training and Equipment
1.3. Operations
2. Recruitment, Training and Equipment 1977–1991
2.1. Recruitment/Conscription and Training
2.2. Equipment
3. Structure, Logistics and Command and Control 1977–1991
3.1. Organization of the Army
3.2. Logistics
3.3. Command and Control
3.3.1. The Triangular Command
3.3.2. The 1989 Abortive Coup
4. Military Intelligence 1977–1991
4.1. Organization of the Military Intelligence Department and its Activities
4.2. Some Limited Achievements of the Military Intelligence Department
4.3. Major Intelligence Failures
4.4. Counter-Intelligence
5. Operations: The Somali-Ethiopian War 1977–1978
6. Operations: Counter-Insurgency Campaigns in Northern Ethiopia
6.1. The Battles for Naqfa 1976–1986
6.2. The Afabét and Sheré Debacles
6.3. From Sheré to Karra Mesheg: Worsening Military Reverses
6.4. The Last Days of the Army
7. The Revolutionary Army and its External Patrons
7.1 The Revolution and the Revolutionary Army
7.2. The Role of Soviet Military Advisers
8. Conclusions: Why did the Army Lose the War?
8.1. Loss of Public Support
8.2. Failure to Apply the Right Counter-Insurgency Strategy and Tactics
8.3. Intelligence Failure
8.4. Problems of Command and Control
8.5. Conscription, Training and Organizational Problems
8.6. War Weariness and Disillusionment