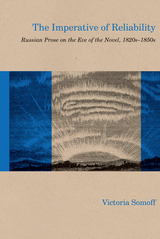 The Imperative of Reliability examines the development of nineteenth-century Russian prose and the remarkably swift emergence of the Russian novel. Victoria Somoff identifies an unprecedented situation in the production and perception of the utterance that came to define nascent novelistic fictionality both in European and Russian prose, where the utterance itself—whether an oral story or a “found” manuscript—became the object of representation within the compositional format of the frame narrative. This circumstance generated a narrative perspective from which both the events and their representation appeared as concomitant in time and space: the events did not precede their narration but rather occurred and developed along with and within the narration itself. Somoff establishes this story-discourse convergence as a major factor in enabling the transition from shorter forms of Russian prose to the full-fledged realist novel.

VICTORIA SOMOFF is an assistant professor in the Department of Russian Language and Literature at Dartmouth College in New Hampshire.


Aknowledgments
Introduction: The Novel in Prose
Chapter 1. Framing the Truth: Discourse as the Object of Discourse in the 1820s-30s
Chapter 2. In Search of Lost Voice: The Tale-Collector in the Prose Cycle
Chapter 3. The Limits of Optic Power in the Society Tale
Chapter 4. Types, Doubles, and the Fantastical Sources of Narrative Realism
Chapter 5. No Need for Dogs or Women: Transparent Minds in Turgenev
Chapter 6. Waking Up to the Novel: The Dream Origin of Goncharov’s Oblomov
Afterword and Afterwards: Tolstoy’s After the Dance
Works Cited