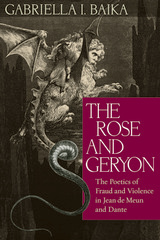 The Rose and Geryon examines patterns of verbal behavior in works by Jean de Meun and Dante (with a focus on the Romance of the Rose and the Divine Comedy) in relationship with the most influential systems of verbal sins in the Middle Ages, systems elaborated by William Peraldus, Thomas Aquinas, Domenico Cavalca, and Laurent of Orléans. The book begins with a presentation of these four systems, and from there proceeds to analyze Jean de Meun's Testament as a possible source of influence for the Divine Comedy and take a closer look at Dante's prose works in search for a comprehensive theory of sinful speech. Furthermore Baika discusses verbal transgressions such as flattery, evil counsel, double talk, sowing of discord, and falsifying of words, under the heading Lingua dolosa "The Guileful Tongue," and the relationship between violence and the poetic discourse. The myriad ways in which the two iconic poets of medieval France and Italy absorb the tradition of peccata linguae in their works prove that abusive speech was not the exclusive sphere of interest of the ecclesiastical writers; secular poetry in the vernacular enriched in original ways the medieval debate on verbal vices. The Rose and Geryon addresses scholars and students of French and Italian literatures, as well as readers interested in ethics and women's studies.
TABLE OF CONTENTS
Contents
Acknowledgments
Introduction
1. The Verbal Sin as a Cultural Construct
2. From Jean De Meun’s Multidiscursive Dispersal to Dante’s System of Sins
3. Lingua Dolosa, “The Guileful Tongue” : Speaking under the Sign of Fraud
4. Blasphemy and the Poetics of Violence
Conclusion
Bibliography
Index