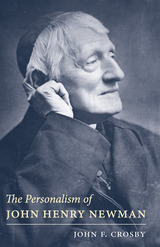 In The Personalism of John Henry Newman, Crosby shows the reader how Newman finds the life-giving religious knowledge that he seeks. He explores the "heart" in Newman and explains what Newman was saying when he chose as his cardinal's motto, cor ad cor loquitur (heart speaks to heart). He explains what Newman means in saying that religious truth is transmitted not by argument but by "personal influence."
TABLE OF CONTENTS
Title Page
Copyright Page
Contents
Acknowledgments
Abbreviations
Introduction
1. Theocentric Religion
2. Imagination and Intellect
3. "Heart Speaks to Heart"
4. Personal Influence
5. "You Must Consent to Think"
6. "An Infinite Abyss of Existence"
7. "The Creative Principle of Religion"
Bibliography
Index