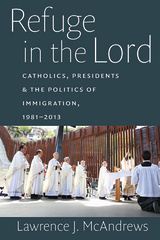 Rather than helping to overcome the growing political divide over immigration in the country and the church, Catholics on the outer edges of the issue contributed to it. By eschewing compromise in favor of confrontation, Catholic legislators from both parties too often helped prevent Congress from giving the presidents, and the public, most of what they wanted on immigration reform. By forsaking political reality in the name of religious purity, Catholic immigration advocates frequently antagonized the presidents whose goals they largely shared, and ultimately disappointed the immigrants they so badly wanted to help.
TABLE OF CONTENTS
Contents
Acknowledgments
Preface
Introduction
Chapter 1: Ronald Reagan 1981-1989
Chapter 2: George H.W. Bush 1989-1993
Chapter 3: Bill Clinton 1993-2001
Chapter 4: George W. Bush 2001-2009
Chapter 5: Barack Obama 2009-2013
Conclusion
Notes
Index