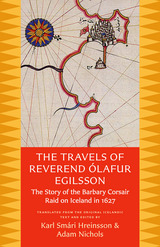 The combination of Reverend Olafur's narrative, the letters, and the material in the Appendices provides a first-hand, in-depth view of early seventeenth-century Europe and the Maghreb equaled by few other works dealing with the period. We are pleased to offer it to the wider audience that an English edition allows.
TABLE OF CONTENTS
Contents
List of Illustrations
Acknowlegments
Introduction
The Travels of Reverend Ólafur Egilsson
Preface by the Copyist
I. About almighty God’s will
II. About signs and events
III. About the preparations that were put into effect when word of the pirates was first heard
IV. About the evil attacks and the methods used to capture some of the people
V. About what honest people told me of how the pirates captured the Icelanders, and how some Icelanders were killed
VI. About how the people were treated as captives by the evil men and put into the Danish Merchant House, and then taken forth and placed onboard a ship
VII. About events in preparation for sailing
VIII. About our travel to the Barbari Coast and what happened during that voyage
IX. About some difficulties that the Turks had on the voyage and about how they reacted
X. About how it went (to the best of my knowledge) for the good people who had been captured and were taken to that place [Algiers]
XI. About what happened to me and my family thereafter
XII. About the remarkable things I saw and about the town [Algiers] itself
XIII. About the dress of the people and how their plates and drinking cups were in that place
XIV. About how I was driven from Algiers and how things went on my miserable travels
XV. About what went on in that place [Livorno], good and bad, and about my journey to Germany
XVI. About that place [Livorno], its churches, the habits of the monks, their dress, and their way of performing divine service
XVII. About their dress in that town [Livorno] and the unusual things that I saw there
XVIII. About my travels to Genoa and from there to Marseilles
XIX. About what happened to me in Marseilles and what prevented me from traveling to Paris
XX. About some of the handwork and practices which I saw there for providing food for the people
XXI. About Marseilles itself, the dress of the inhabitants, both men and women, and about my travels from there
XXII. About what happened to me in Holland, and about that country and its places
XXIII. About my travels to Fleyland [the island of Vlieland, Holland] and to Krónuborg [Kronborg, on the island of Zealand, Denmark] and my reception there
XXIV. About my arrival in Copenhagen, my good reception, and donations from honest men, learned and not
XXV. About my complaint, which I had to relate to everyone, and about how I was incapacitated by my sorrows, and about what sorrow and pain may do for us
XXVI. About my voyage from Copenhagen to Iceland and how I was received when I came there
XXVII. About the comfort and consolation that we get from the words of God; He tells us to pray for help and promises us a hearing, and of this we have examples
Afterword
Letters, Appendixes, Suggestions for Further Reading & Index
Letters
Kláus Eyjólfsson
Guðríður Símonardóttir
Guttormur Hallsson
Jón Jónsson
Anonymous Letter
Appendixes
Algiers and Salé
The Icelandic Background
The Manuscript Sources
The Times
Suggestions for Further Reading
Index