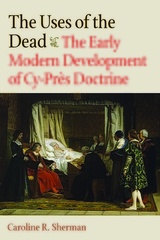 Cy-près doctrine, which allows the purpose of a failing or impractical charitable gift to be changed, has been understood since the eighteenth century as a medieval canon law principle, derived from Roman law, to rescue souls by making good their last charitable intentions. The Uses of the Dead offers an alternate origin story for this judicial power, grounded in modern, secular concerns.

Posthumous gifts, which required no sacrifice during life, were in fact broadly understood by canon lawyers and medieval donors themselves to have at best a very limited relationship to salvation. As a consequence, for much of the Middle Ages the preferred method for resolving impossible or impractical gifts was to try to reach a consensus among all of the interested parties to the gift, including the donor's heirs and the recipients, with the mediation of the local bishop.

When cy-près emerged in the seventeenth century, it cut a charitable gift o from return to the donor's estate in the event of failure. It also gave the interested parties to the gift (heirs, beneficiaries, or trustees) little authority over resolutions to problematic gifts, which were now considered primarily in relationship to the donor's intent—even as the intent was ultimately honored only in its breach. The Uses of the Dead shows how cy-près developed out of controversies over church property, particularly monastic property, and whether it might be legally turned over to fund education, poor relief, or national defense.

Renaissance humanists hoped to make better, more prudent uses of property; the Reformation sought to correct superstitious abuses of property and ultimately tended to prevent donors' heirs from recovering secularized ecclesiastical gifts; and the early modern state attempted to centralize poor relief and charitable efforts under a more rational, centralized supervision. These three factors combined to replace an older equitable ideal with a new equitable rule—one whose use has rapidly expanded in the modern era to allow assorted approximations and judicial redistributions of property.
TABLE OF CONTENTS
Contents
Acknowledgments
Abbreviations
Introduction
1. Posthumous Gifts and the Soul
2. Patronage Rights and Consensus in Medieval Gift Culture
3. Use in the Ius Commune
4. Humanist Influences
5. Gifts in the Continental Reformations
6. Charitable Uses in the English Reformation
7. A Doctrine Is Born
Epilogue
Bibliography
Index