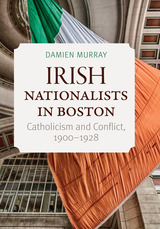 During the first quarter of the twentieth century, the intersection of support for Irish freedom and the principles of Catholic social justice transformed Irish ethnicity in Boston. Prior to World War I, Boston’s middle-class Irish nationalist leaders sought a rapprochement with local Yankees. However, the combined impact of the Easter 1916 Rising and the postwar campaign to free Ireland from British rule drove a wedge between leaders of the city’s two main groups. Irish-American nationalists, emboldened by the visits of Irish leader Eamon de Valera, rejected both Yankees’ support of a postwar Anglo-American alliance and the latter groups’ portrayal of Irish nationalism as a form of Bolshevism. Instead, ably assisted by Catholic Church leaders such as Cardinal William O’Connell, Boston’s Irish nationalists portrayed an independent Ireland as the greatest bulwark against the spread of socialism. As the movement’s popularity spread locally, it attracted the support not only of Irish immigrants, but also that of native-born Americans of Irish descent, including businessman, left-leaning progressives, and veterans of the women’s suffrage movement.

For a brief period after World War I, Irish-American nationalism in Boston became a vehicle for the promotion of wider democratic reform. Though the movement was unable to survive the disagreements surrounding the Anglo-Irish Treaty of 1921, it had been a source of ethnic unity that enabled Boston’s Irish community to negotiate the challenges of the postwar years including the anti-socialist Red Scare and the divisions caused by the Boston Police Strike in the fall of 1919. Furthermore, Boston’s Irish nationalists drew heavily on Catholic Church teachings such that Irish ethnicity came to be more clearly identified with the advocacy of both cultural pluralism and the rights of immigrant and working families in Boston and America.
TABLE OF CONTENTS
Contents
List of Illustrations
Preface
Acknowledgments
List of Abbreviations
Introduction
1. "Everything Looks Glorious for the Old Cause": The UILA and the Campaign for Home Rule
2. "Sinn-Féin Americanism": World War I and the Easter Rising
3. "Nobody Ever Heard of an Irish Anarchist": Boston Catholics and the Red Scare
4. Setting Boston on Fire: De Valera’s Coalition
5. "The Head and Fangs of Bigotry Are Spreading in Yankeedom": Irish Nationalism and the Dawn of the Tribal Twenties
Conclusion
Bibliography
Index