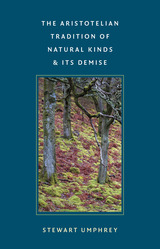 There are two great traditions of natural-kinds realism: the modern, instituted by Mill and elaborated by Venn, Peirce, Kripke, Putnam, Boyd, and others; and the ancient, instituted by Aristotle, elaborated by the “medieval” Aristotelians, and eventually overthrown by Galilean and Newtonian physicists, by Locke, Leibniz, and Kant, and by Darwin. Whereas the former tradition has lately received the close attention it deserves, the latter has not. The Aristotelian Tradition of Natural Kinds and its Demise is meant to fill this gap. The volume’s theme is the emergence of Aristotle’s account of species, what Schoolmen such as Thomas Aquinas and William of Ockham did with this account, and the tacit if not explicit rejection of all such accounts in modern scientific theory. By tracing this history Stewart Umphrey shows that there have been not one but two relevant “scientific revolutions” or “paradigm shifts” in the history of natural philosophy. The first, brought about by Aristotle, may be viewed as a renewal of Presocratic natural philosophy in the light of Socrates’s “second sailing” and his insistence that we attend to what is first for us. It features an eido-centric conception of living organisms and other enduring things, and strongly resists any reduction of physics to mathematics. The second revolution, brought about by seventeenth-century physics, features a nomo-centric view according to which what is fundamental in nature are not enduring individuals and their kinds, as we commonly suppose, but rather certain mathematizable relations among varying physical quantities. Umphrey examines and compares these two very different ways of understanding the natural order.
TABLE OF CONTENTS
Contents
Acknowledgments
Prologue
1. Origin of the Idea of Natural Kinds
2. Eidos and Genesis I: Plato
3. Eidos and Genesis II: Aristotle
4. And the Word of God
5. Lex and Motus I: Galilean Science
6. Lex and Motus II: After Descartes
7. Darwin
Selected Bibliography
Index