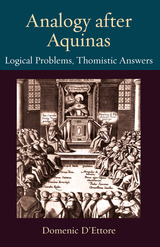 Since the first decade of the 14th Century, Thomas Aquinas’s disciples have struggled to explain and defend his doctrine of analogy. Analogy after Aquinas: Logical Problems, Thomistic Answers relates a history of prominent Medieval and Renaissance Thomists’ efforts to solve three distinct but interrelated problems arising from their reading both of Aquinas’s own texts on analogy, and from John Duns Scotus’s arguments against analogy and in favor of univocity in Metaphysics and Natural Theology. The first of these three problems concerns Aquinas’s at least apparently disparate statements on whether a name is said by analogy through a single concept or through diverse concepts. The second problem concerns the model of analogy suited for predicating names analogously across the categories of being or about God and creatures. Is “being” said analogously about God and creatures, or substance and accidents, on the model of how “healthy” is said of medicine and an animal, or on the model of how “principle” is said of a point and a line? The third problem comes from outside challenges to Aquinas’s thought, in particular Scotus’ claims that univocal names alone can mediate valid demonstrations, and any demonstration that failed to use its mediating terms univocally would fail by the fallacy of equivocation. Analogy after Aquinas makes a unique contribution to the study of philosophical theology in the tradition of Thomas Aquinas by showing the historical and philosophical connection between these three problems, as well as the variety of solutions proposed by leading representatives of this tradition. Thomists considered in the book include: Hervaeus Natalis (1250-1323), Thomas Sutton (1250-1315), John Capreolus (1380-1444), Dominic of Flanders (1425-1479), Paul Soncinas (d. 1494), Thomas dio vio Cajetan (1469-1534), Francis Silvestri of Ferrara (1474-1528), and Chrysostom Javelli (1470-1538).
TABLE OF CONTENTS
Contents
Tables
Acknowledgments
Abbreviations
Introduction
1. The Objection from John Duns Scotus
2. Hervaeus Natalis and Thomas Sutton
3. John Capreolus
4. Flandrensis and Soncinas
5. Cajetan
6. Early Reception of Cajetan
Conclusion
Selected Bibliography
Index