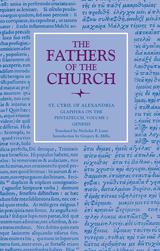 Cyril of Alexandria (ca. 376–444) is best known for his defense of orthodoxy at the time of the Nestorian controversy over the nature of Christ. However, by far the larger part of Cyril’s literary output consisted of commentaries on books of both Old and New Testaments, written before the Christological debate was sparked off in 428. One of these works, of major proportions, was the so-called Glaphyra (“elegant comments”) on the Pentateuch. This comprises a total of thirteen separate “books,” or volumes: seven on Genesis, three on Exodus, and one each on Leviticus, Numbers and Deuteronomy. The comments primarily concern the narrative portions of the Pentateuch, hence the greater space given to Genesis, though a number of the legal prescriptions are also treated. This present volume, containing all seven books on Genesis, is the first of a projected two-volume set which will offer a translation of the whole Glaphyra for the first time in English. Cyril’s aims within the commentary are both theological and pastoral. His chosen method begins with a consideration of the historia. Here the Alexandrian patriarch deals with the text at the literal level. At this stage he explains any historical, cultural, and at times even linguistic and textual issues presented within the passage, which is then followed by some theological instruction or lessons of a more practical nature based upon the literal interpretation. The exposition then moves on to the theoria. This is Cyril’s preferred term for the contemplation of the spiritual sense, that is to say, the mystery of Christ which he firmly held lay hidden beneath the surface of the Old Testament text. With great adeptness and consistency Cyril identifies elements within the ancient narratives as figures, or “types and shadows,” of the Lord Jesus Christ, the Church, and the teachings of the gospel.
TABLE OF CONTENTS
Contents
Acknowledgments
Abbreviations
Select Bibliography
Introduction
Encountering Cyril of Alexandria the Exegete
Biography of Cyril
The Purpose and Structure of the Glaphyra
The Bishop as Exegete and Enlightener
The Glaphyra and Jewish-Christian Relations in Alexandria
Theological Themes in the Glaphyra
Conclusion
Preface
The Text
The Translation
Key Terms
Format
Sources Consulted
Glaphyra on the Pentateuch, Volume 1: Genesis
Book One: Genesis 1–5
Book Two: Genesis 6–14
Book Three: Genesis 15–27
Book Four: Genesis 27–30
Book Five: Genesis 30–35
Book Six: Genesis 36–48
Book Seven: Genesis 49