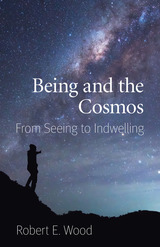 Robert Wood’s aim in Being and the Cosmos<\i> is to reestablish a speculative view of the cosmos that goes back to the ancient Greeks and that corresponds to the holism of contemporary physics. There are two sets of problems in contemporary thought that militate against any such attempt. Most widespread is scientific reductionism in biology and neuroscience that explains awareness in terms of the mechanisms that underlie it. The second is the widespread attack in philosophy itself on speculative holism by deconstruction and anti-foundationalism.

In Being and the Cosmos<\i>, the tack against both is to make explicit the character of the mind that sees and thinks, that actively takes up commitment to the truth available in the disciplines involved. The basic ground of this position rests upon the functioning of the notion of Being that opens up the question of the character of the Whole and the human being’s place in it. Thus position the treatment of the notion of Being as foundation and as orientation toward the Whole between the attack on reductionism and on deconstruction and anti-foundationalism. Wood concludes with a multidimensional sketch of an evolutionary view of the cosmos whose initial phases contain the potentialities for life, sensibility, and intellect as cosmic telos. The holism of contemporary physics has to be reconfigured in terms of this observation. Both reductionists and dualists should know that matter itself has to be re-minded and that mind itself matters.
TABLE OF CONTENTS
Contents
Acknowledgments
Introduction
1. What Is Seeing?
2. First Things First
3. The Undeconstructible Foundations of Human Existence
4. The Cosmos Has an Inside
Bibliography
Index of Names
General Index