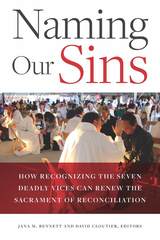 What would it take to renew our ability to name our sins in a meaningful and pertinent way? Naming sins is a particularly important task for Catholic moral theology, but it is one that often falls back into a paradigm of simple violations of rules. While laws and commandments are essential, Vatican II’s universal call to holiness and the revival of virtue ethics require moving further. Yet in part because moral theologians today tend to be lay people, not priests, there has been a de-emphasis on the confession of sins. Contemporary questions like poverty, racism, and abortion are usually connected to questions about sin in some way, but they are disconnected from the idea of naming specific sins in the sacrament of penance. Lay moral theologians raise these issues in a way that makes clear their implications for a parish social justice committee (or the voting booth), but not their implications for the naming of sins in the sacrament of reconciliation. Naming Our Sins proposes to re-make that connection: the moral theologian’s task of helping people name individual sins needs to be restored, though in ways distinctive from dominant pre-Vatican II notions.

In this volume, editors Jana Bennett and David Cloutier gather some of the best of the current generation of moral theologians in order to reflect on the classic tradition of the vices. It is crucial to the Christian understanding of sin that we recognize (a) we bear at least some responsibilities for injuries, and (b) God wants us to participate in the process of healing and conversion. Neither the sin itself nor the healing simply come from somewhere else; the task of naming sins enlists us as mature, growing disciples.