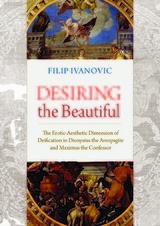 Desiring the Beautiful studies the concept of deification, theosis, in two of the most influential early Christian philosopher-theologians, who might be considered as theoretical consolidators of the idea of theosis, and argues that the proper understanding of their central soteriological concept must take into account its dimension of love and beauty.
TABLE OF CONTENTS
Contents
Acknowledgments
Abbreviations
Introduction
Part 1. Dionysius the Areopagite
1. Love
2. Beauty
3. Deification
Part 2. Maximus the Confessor
4. Love
5. Beauty
6. Deification
Conclusion. Love and Beauty in Deification
Bibliography
Index