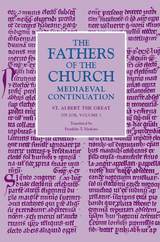 Even prior to his death on 15 November 1280, the Dominican master Albert of Lauingen was legendary on account of his erudition. He was widely recognized for the depth and breadth of his learning in the philosophical disciplines as well as in the study of God, earning him the titles Doctor universalis and Doctor expertus. Moreover, his authoritative teaching merited him the moniker Magnus, an appellation bestowed on no other man of the High Middle Ages. This volume contains the first half of Albert the Great’s commentary On Job (on chs. 1-21), translated into English for the first time; a translation of the second half of the work will appear in a subsequent volume of the Fathers of the Church, Mediaeval Continuation series. Albert completed Super Iob in 1272 or 1274, when he was over seventy years old, at the Dominican Kloster of Heilige Kreuz in Cologne, where, as lector emeritus of the Order, he likely lectured on this profound biblical book. Significantly, Albert may have been inspired to produce On Job by his most famous student, Thomas Aquinas, who had written his own Joban commentary, the Expositio super Iob ad litteram, while serving as conventual lector at San Domenico in Orvieto from 1261 to 1264. Yet Albert occupies a unique position in the history of the interpretation of Job: he is the first and only exegete in history who explicitly reads the whole book as a debate in the mode of an academic or scholastic disputation among Job and his friends about divine providence concerning human affairs. The Introduction to this volume situates Albert’s On Job—its general approach and key exegetical features—in the broad context of Dominican theological education and pastoral formation in the thirteenth century.
TABLE OF CONTENTS
Series page
Title page
Copyright page
Dedication
Contents
Acknowledgments
Abbreviations
Select Bibliography
Introduction
A. Doctor universalis
B. The Science of Theology
A. Context
B. Exegetical Method: Five Key Features
C. The Book of Job as Scholastic Disputation
D. A Note on the Latin Text andthe Present Translation
On Job, Volume 1
The Prologue of Blessed Albert
Chapter 1
Chapter 2
Chapter 3
Chapter 4
Chapter 5
Chapter 6
Chapter 7
Chapter 8
Chapter 9
Chapter 10
Chapter 11
Chapter 12
Chapter 13
Chapter 14
Chapter 15
Chapter 16
Chapter 17
Chapter 18
Chapter 19
Chapter 20
Chapter 21
Indices
General Index
Index of Holy Scripture