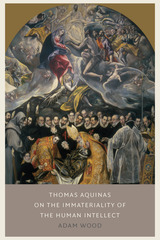 Thomas Aquinas on the Immateriality of the Human Intellect represents the first book-length examination of Aquinas's claim that the human intellect is immaterial, and so — given the centrality of this claim to his thought — should interest any scholars interested in understanding Thomas. While it focuses throughout on careful attention to Aquinas's texts along with the relevant secondary literature, it also positions Thomas's thought alongside recent developments in metaphysics and philosophy of mind. Hence it should also interest historically-minded metaphysicians interested in understanding how Thomas's hylomorphism intersects with recent work in hylomorphic metaphysics, philosophers of mind interested in understanding how Thomas's philosophical psychology relates to contemporary forms of dualism, physicalism and emergentism, and philosophers of religion interested in the possibility of the resurrection.
TABLE OF CONTENTS
Contents
Acknowledgments
Abbreviations and Notes on the Text
Introduction
1. Forms as Limiting Principles
2. Forms as Essences, Structures, Truthmakers, and Powers
3. From Incorporeality to Incorruptibility
4. Aquinas’s Theory of Cognition
5. Aquinas’s Arguments for the Immateriality of the Human Intellect
6. The Immateriality of the Human Intellect and the Life to Come
Selected Bibliography
Index