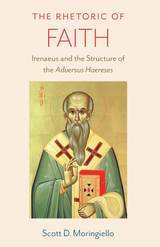 The Rhetoric of Faith argues that the structure of Irenaeus’s opus magnum, the Adversus Haereses, is the argument of the Adversus Haereses. Through a close reading of the Irenaeus’s text, as well as through a comparison with Greco-Roman rhetorical texts, Scott Moringiello argues that Irenaeus structured his argument around the articles of the faith of the Church and that this structure builds on tropes found in the Greco-Roman rhetorical tradition.

The argument focuses on the Adversus Haereses, although it does begin with some discussion to put Irenaeus in the context of second century Christian literature. Moringiello concludes with a discussion of Irenaeus’s Demonstration of the Apostolic Preaching.Other scholars have provided introductions to Irenaeus’s work, and other scholars have argued for the structural unity of the Adversus Haereses. No other scholar, though, has argued that the faith of the Church is the basis of Irenaeus’s argument. This argument, then, presents an important contribution to the field of Irenaeus studies.
TABLE OF CONTENTS
Title page
Copyright page
Dedication
Contents
Preface
Acknowledgments
Abbreviations
Introduction
1. Silence
2. Fiction
3. Manifestation
4. Prophecy
5. Judgment
Conclusion
Appendix
Selected Bibliography
Index