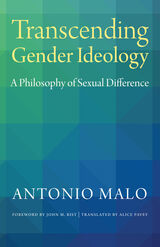 Human sexuality is a very important subject, especially in a cultural context such as ours, in which social and work transformations offer behavioral models that are characterized by a remarkable sexual indeterminacy. In Transcending Gender Ideology, Antonio Malo tries to rethink sexuality with equilibrium and intellectual rigor, using a philosophical approach, since sexuality does not only affect biological aspects or social conditioning, but above all the same essence of the relationship between man and woman.

Malo’s reflections begin with the historical evolution of the concept of sexuality: the naturalistic conception, which sees the difference between man and woman as something biological and absolute, and the postmodern conception, which criticizes it by judging human sexuality as a socio-cultural construction or gender. According to Malo, the limitation of the gender approach is to deny the relationship of human sexuality to the body and to the differences between man and woman. In fact, by rejecting these aspects, they end up sustaining a limitless creativity of freedom, which transforms the body into something that is used at will, and relationships as something fluid.

Faced with these extremes, Malo proposes a vision of sexuality as a personal condition or sexed condition, received at the time of birth, but which develops, grows and matures through family models, experiences and relationships. Even if based on an original sexual difference, sexed condition covers many other aspects: physical, psychological, social and cultural, as well as behavioral patterns and, above all, the personal integration of sexuality through the gift of oneself in marriage or in celibacy.
TABLE OF CONTENTS
Title Page
Copyright Page
Contents
Acknowledgments
Foreword
Introduction
Chapter One. Sexuality and Human Identity
Chapter Two. Sexuality, Culture, and Philosophy
Chapter Three. Two Historical Views of Sexuality and Another Option
Chapter Four. Sexed Condition Versus Gender
Chapter Five. Generativity Versus Homophobia
Chapter Six. The Integration of Sexuality and the Relational Paradigm
Conclusion
Bibliography
Index