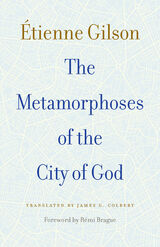 The Metamorphoses of the City of God
by Etienne Gilson
foreword Remi Brague
translated by James G. Colbert

Étienne Gilson (1884-1978) was a French philosopher and historian of philosophy, as well as a scholar of medieval philosophy. In 1946 he attained the distinction of being elected an "Immortal" (member) of the Académie française. He was nominated for the Nobel Prize in Literature in 1959 and 1964.

The appearance of Gilson's Metamorphosis of the City of God, which were originally delivered as lectures at the University of Louvain, Belgium, in the Spring of 1952, coincided with the first steps toward what would become the European Union. The appearance of this English translation coincides with the upheaval of Brexit. Gilson traces the various attempts of thinkers through the centuries to describe Europe's soul and delimit its parts. The Scots, Catalonians, Flemings, and probably others may nod in agreement in Gilson's observation on how odd would be a Europe composed of the political entities that existed two and a half centuries ago. Those who think the European Union has lost its soul may not be comforted by the difficulty thinkers have had over the centuries in defining that soul. Indeed the difficulties that have thus far prevented integrating Turkey into the EU confirm Gilson's description of the conundrum involved even in distinguishing Europe's material components. And yet, the endeavor has succeeded, so that the problem of shared ideals remain inescapable. One wonders which of the thinkers in the succession studied by Gilson might grasp assent and illuminate the EU's path.
TABLE OF CONTENTS
Contents
Foreword by Rémi Brague
Translator’s Note
Preface
One. Origins of the Problem
Two. The City of God
Three. The Christian Commonwealth
Four. The Universal Empire
Five. On the Peace of Faith
Six. The City of the Sun
Seven. The Birth of Europe
Eight. The City of the Philosophers
Nine. The City of Scientists
Ten. The Church and Universal Society
Selected Bibliography
Index of Names
General Index