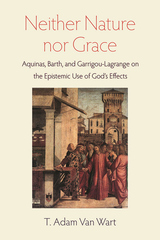 Neither Nature nor Grace operates at the intersection of systematic and philosophical theology, exploring in particular how St. Thomas Aquinas variously uses the latter in service to the clarification and faithful advancement of the former. More specifically, Neither Nature nor Grace explores the overlooked logical difficulties that have followed the late modern debates in ecumenical Christian theology as to whether knowledge of God is available solely through God’s gracious self-revelation (e.g., Jesus Christ and Holy Scripture), or through revelation and the deliverances of natural reason. Van Wart takes the prominent French Dominican Reginald Garrigou-Lagrange as paradigmatic for the case that knowledge of God can be had by both revelation and natural reason. Representing the opposing position, that God can only be known through divine revelation, Van Wart highlights the work of influential Protestant theologian Karl Barth. By placing these two imposing 20th century theologians in conversation, and by providing a careful theo-philosophical analysis of the logical mechanics of each thinker’s respective arguments, Van Wart shows how both inadvertently overreach their self-professed epistemological bounds and just so run into significant problems maintaining the coherence of their relative theological positions. That is, against their expressed intentions to the contrary, both thinkers unwittingly evacuate the divine essence of the mystery Christian tradition has always previously claimed it to have, effectively reducing the being of God to mere creaturely being writ large. As a contrasting corrective to this problem, Van Wart proffers a constructive grammatical reading of Aquinas’s measured account of the crucial but often overlooked logical differences between what can be said of the divine, on the one hand, versus what can be known of God, on the other. While many recent works have attempted to solve the ongoing arguments which Garrigou-Lagrange and Barth epitomize regarding the epistemic use of God’s effects, Van Wart’s contribution constructively pushes the conversation to a different level in showing how Aquinas’s grammar of God provides a salutary means of dissolving and moving beyond these contentious debates altogether.
TABLE OF CONTENTS
Contents
Acknowledgments
List of Abbreviations
1. Whether Nature or Grace?
2. Barth’s Argument for Divine Knowledge Sola Gratia
3. Garrigou’s Case for a Natural Knowledge of God
4. Garrigou’s Metaphysical Overreach
5. Barth’s Christological Quagmire
6. Aquinas’s Epistemic Reserve
7. Neither Nature nor Grace
Appendix: Sketching a Quietist Barth
Selected Bibliography
Index