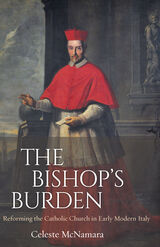 In 1563, the Council of Trent published its Decrees, calling for significant reforms of the Catholic Church in response to criticism from both Protestants and Catholics alike. Bishops, according to the Decrees, would take the lead in implementing these reforms. They were tasked with creating a Church in which priests and laity were well educated, morally upright, and focused on worshipping God. Unfortunately for these bishops, the Decrees provided few practical suggestions for achieving the wide-ranging changes demanded. Reform was therefore an arduous and complex process, which many bishops struggled to accomplish or even refused to undertake fully.

The Bishop’s Burden argues that reforming bishops were forced to be creative and resourceful to accomplish meaningful change, including creating strong diocesan governments, reforming clerical and lay behavior, educating priests and parishioners, and converting non-believers. The book explores this issue through a detailed case study of the episcopacy of Cardinal-Bishop Gregorio Barbarigo of Padua (bp. 1664-1697), asking how a dedicated bishop formulated a reform program that sought to achieve the Church’s goals. Barbarigo, like other reforming bishops, borrowed strategies from a variety of sources in the absence of clear guidance from Rome. He looked to both pre- and post-Tridentine bishops, the Society of Jesus, the Venetian government, and the Propaganda Fide, which he selectively emulated to address the problems he discovered in Padua. The book is based primarily on the detailed records of Barbarigo’s visitations of rural parishes and captures the rarely-heard voices of seventeenth-century Italian peasants.

The Bishop's Burden helps us understand not only the changes experienced by early modern Catholics, but also how even the most sophisticated plans of central authorities could be frustrated by practical realities, which in turn complicates our understanding of state-building and social control.
TABLE OF CONTENTS
Title page
Copyright page
Dedication
Contents
Note on Archival Sources
Acknowledgments
Abbreviations
Introduction
1. The Reformer Enounters His Diocese
2. Restoring Power and Authority
3. Ensuring Pastoral Care
4. Educating the Clergy
5. Catholic Reform and Missions
Conclusion
Bibliography
Index