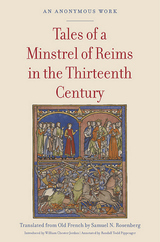 An anonymous minstrel in thirteenth-century France composed this gripping account of historical events in his time. Crusaders and Muslim forces battle for control of the Holy Land, while power struggles rage between and among religious authorities and their conflicting secular counterparts, pope and German emperor, the kings of England and the kings of France. Meanwhile, the kings cannot count on their independent-minded barons to support or even tolerate the royal ambitions. Although politics (and the collapse of a royal marriage) frame the narrative, the logistics of war are also in play: competing military machinery and the challenges of transporting troops and matariel. Inevitably, the civilian population suffers.

The minstrel was a professional story-teller, and his livelihood likely depended on his ability to captivate an audience. Beyond would-be objective reporting, the minstrel dramatizes events through dialogue, while he delves into the motives and intentions of important figures, and imparts traditional moral guidance. We follow the deeds of many prominent women and witness striking episodes in the lives of Eleanor of Aquitaine, Richard the Lionhearted, Blanche of Castile, Frederick the Great, Saladin, and others. These tales survive in several manuscripts, suggesting that they enjoyed significant success and popularity in their day.