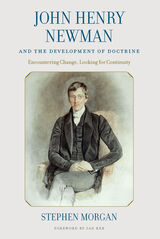 John Henry Newman and the Development of Doctrine provides an analysis of the attempts by John Henry Newman to account for the historical reality of doctrinal change within Christianity in the light of his lasting conviction that the idea of Christianity is fixed by reference to the dogmatic content of the deposit of faith. It argues that Newman proposed a series of hypotheses to account for the apparent contradiction between change and continuity, that this series begins much earlier than is generally recognized and that the final hypothesis he was to propose, contained in An Essay on the Development of Christian Doctrine, provides a methodology of lasting theological value and contemporary relevance.

Stephen Morgan establishes the centrality of the problem of change and continuity in theology, to Newman's theological work as an Anglican, its part in his conversion to Catholicism and its contemporary relevance to Catholic theology. It also surveys the major secondary literature relating to the question, with particular reference to those works published within the last fifty years. Additionally, Morgan considers the legacy of the Essay as a tool in Newman’s theology and in the work of later theologians, finally suggesting that it may offer a useful methodological contribution to the contemporary Catholic debate about hermeneutical approaches to the Second Vatican Council and post-conciliar developments in doctrine.
TABLE OF CONTENTS
Title Page
Copyright Page
Dedication
Contents
Foreword
Acknowledgments
Abbreviations
Introduction
Chapter 1. Becoming Aware of the Difficulty. Encountering Change While Looking for Continuity—the Period to 1833
Chapter 2. Antiquity, the Via Media, and a Catholicism of the World—1833 to 1838
Chapter 3. From a Catholicism of the Word to a Catholicism of the Church—1839 to 1842
Chapter 4. From a Catholicism of the Church to the Church of Catholicism—1842 to 1845
Conclusion
Bibliography
Index