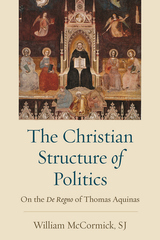 The Christian Structure of Politics, the first full-length monograph on Thomas Aquinas's De Regno in decades, offers an authoritative interpretation of De Regno as a contribution to our understanding of Aquinas's politics, particularly on the relationship between Church and State. William McCormick argues that Aquinas takes up a via media between Augustine and Aristotle in De Regno, invoking human nature to ground politics as rational, but also Christian principles to limit politics because of both sin and the supernatural end of man beyond politics. Where others have seen disjoined sections on the best regime, tyranny, and the reward of the king, McCormick identifies a dialogical structure to the text - one not unlike the disputed question format - whereby Aquinas both tempers expectations for the best government and offers a spiritual diagnosis of tyranny, culminating in a sharp critique of civil religion and political theology.

McCormick draws upon historical research on Aquinas' context, especially that of Anthony Black, Cary Nederman and Francis Oakley, from which he develops three themes: the medieval preponderance of kingship and royal ideology; the relationship between Church and State; and the intersection of Latin Christianity and Greco-Roman antiquity. While age-old concerns, recent research in these areas has allowed us to move beyond simplistic platitudes.

For scholars of political theory and the history of political thought, De Regno will prove fascinating for the interplay of Aristotelian and Augustinian elements, undercutting the conventional wisdom that Aquinas was simply an Aristotelian. De Regno also includes an extended treatment of civil religion, one of Aquinas’ most historically-oriented discussions of politics.
TABLE OF CONTENTS
Contents
Acknowledgments
A Note on the Text
Introduction. Christianity and Politics
Chapter 1. The Aristotelian State of Nature: De Regno I.1–2
Chapter 2. The Augustinian Earthly City: De Regno I.3–6
Chapter 3. The Reward of the King: De Regno I.7–12
Chapter 4. The Politics of Revelation: De Regno II.1–8
Chapter 5. The Christian Structure of Politics: De Regno on Church and State
Conclusion. On Actions and Words
Bibliography
Index