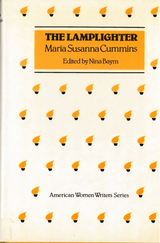 The Lamplighter was the first novel by twenty-seven-year-old Maria Susanna Cummins. It propelled her into a prominence that continued until her early death at the age of thirty-nine. A novel of female development, The Lamplighter is a woman's version of the quest story. Its heroine, Gerty, comes on the scene as a child abandoned in the slums of Boston. Rescued by the kindly lamplighter Trueman Flint, she learns to meet life with courage and honesty. The novel touched the hearts, validated the ideals, and assuaged the anxieties of a huge readership, and it remained continuously in print until the 1920s.
AUTHOR BIOGRAPHY
Nina Baym is Professor of English an Jubilee Professor of Liberal Arts and Sciences at the University of Illinois at Urbana-Champaign. She is the author of many books, including Feminism and American Literary History and American Women Writers and the Work of History, 1790-1860, both published by Rutgers University Press.