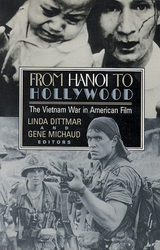 This volume is about power. It is about the power to make war and to destroy lives. It is also about another kind of power-the power to make images that may distort, displace, and destroy knowledge of the times in which those lives were lived. Many of the nineteen essays gathered in this volume are about the interrelationships between these two types of power. They demonstrate, as well, yet another type of power, the power of critical thinking to challenge dangerous myths and to confront prevailing ideologies.

The title of this anthology calls attention to the process whereby aspects of the Vietnam War have been appropriated by the American cultural industry. Probing the large body of emotion-laden, controversial films, From Hanoi to Hollywood is concerned with the retelling of history and the retrospection that such a process involves. In this anthology, an awareness of film as a cultural artifact that molds beliefs and guides action is emphasized, an awareness that the contributors bring to a variety of films. Their essays span over one hundred documentary and fiction films, and include in-depth analyses of major commercial films, ranging from Apocalypse Now to Platoon, Rambo: First Blood Part II, and Full Metal Jacket, and documentaries from In the Year of the Pig to Dear America: Letters Home from Vietnam.

The essays fin this volume deal with representations of the Vietnam war in documentary film and television reporting, examining the ways the power of film is used to deliver political messages. There are surprises here, new readings, and important insights on the ways we as a society have attempted to come to terms with the experiences of the Vietnam era. The book also contains two appendixes-a detailed chronology charting the relationship between major historical events and the release of American war films from 1954 through 1988, and a filmography listing information on over four hundred American and foreign films about the Vietnam War.