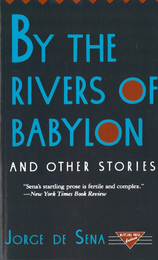 From Publishers Weekly:
This modest collection of short stories, written between 1946 and 1964, is the first by this influential Portuguese man of letters to be published in English. Their subjects often prominent historical figures, all are densely written, cerebral. The title story describes the tortured creative process of a famous 16th century Portuguese poet as he sets out to write his most celebrated poem. "A Night of Nativity" reports a fervent conversation between a Roman tribune and St. Paul. The whimsical "Sea of Stones" tells how the seventh century English monk, the Venerable Bede, forced the stones of an ancient Druid temple to speak. These 11 short stories are for the most part highly moralistic, at their best arguing the strict Catholic tenets of faith; less successful are the author's anguished attempts to describe the artistic temperament. Tantalizing by the promise they show, the short narratives are unfleshed, lacking the spark of animation. As a collection, with an informative foreword by the author's close colleague, they supplement our scant knowledge of this scholar and social activist.
AUTHOR BIOGRAPHY
Daphne Patai (born 1943) is a scholar and author.

She is a professor in the Department of Languages, Literatures, and Cultures at the University of Massachusetts Amherst. Her PhD is in Brazilian literature, but her early work also focused on utopian and dystopian fiction. She is a leading critic of the politicization of education, in particular of the decline of free speech on college campuses as programs conform to pressures from feminists and other identity groups.

She is the daughter of the anthropologist Raphael Patai.