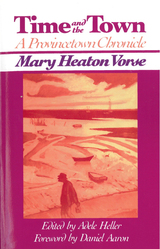 Time and the Town was the last of Mary Heaton Vorse's books. It is about many things--a town and its people, the author, a certain kind of idyllic life. As much as anything else, it is the biography of the house Vorse bought in 1907 and lived in, off and on, for the next thirty-six years. The moods of the house mirrored her own. "Our houses," she wrote, "are our biographies, the stories of our defeats and victories."

Tinged with nostalgia and disenchantment, the book describes a Provincetown that has changed, a place on the verge of modernity. It is no longer a major fishing port. It has become a place whose business is tourism. Contrasting the old and the new, Vorse celebrates the enduring character of the town itself. She tells stories that are engaging and charming, droll and fabulous. The wrinkled Mrs. Mary Mooncusser who, though drunk and stark naked, conducts herself with great decorum when Vorse pays her a call, might have stepped out of the pages of Sherwood Anderson or Eudora Welty. In another anecdote, the townspeople scour the beaches for cases of booze dumped into the sea by rumrunners and are briefly inflated with the spirit of ancestral smugglers and buccaneers.

Vorse herself remained something of an outsider in Provincetown, despite her evident affection for the place and its inhabitants. They surely regarded her as simply another of those artist-intellectuals--many of whom appear in the pages of this book. The "off-Cape" outsiders put the town in the national limelight but took no interest in local matters. Vorse here ponders local matters exclusively, almost, one suspects, as a way of forgetting the more complex matters that occupied her--her agonies of parental guilt, her resentment of domestic obligations, her third marriage, her depressions and breakdowns. The town is in that sense beyond time.