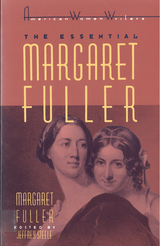 The leading feminist intellectual of her day, Margaret Fuller has been remembered for her groundbreaking work, Woman in the Nineteenth Century, which recharted the gender roles of nineteenth-century men and women. In this new collection, the full range of her literary career is represented from her earliest poetry to her final dispatch from revolutionary Italy. For the first time, the complete texts of Woman in the Nineteenth Century and Summer on the Lakes are printed together, along with generous selections from Fuller's Dial essays, New York essays, Italian dispatches, and unpublished journals. Special features are the complete text of Fuller's famous "Autobiographical Romance" (never before reprinted in its entirety) and nineteen of her poems, edited from her manuscripts. All of Fuller's major texts are completely annotated, with special attention to her literary and historical sources, as well as her knowledge of American Indian culture, mythology, and the Bible

Jeffrey Steele's introduction provides an important revision of Fuller's biography and literary career, tracing the growth of her feminism and her development into one of America's preeminent social critics. No other writer of Fuller's day could match the range of her experience. Growing up in the world of Boston intellectuals, she was the close friend of the Alcotts, Emerson, Hawthorne, and Thoreau. But she also traveled adventurously to the western frontier, canoed down rapids with Chippewa Indians, visited the outcast and the poor in New York's institutions and prisons, and experienced the rigors of war during the bombardment of Rome. As a whole, this anthology provides the material to understand one of the most fascinating nineteenth-century American women writers.

AUTHOR BIOGRAPHY
Jeffrey Steele is Professor of English at the University of Wisconsin. He is the author of Unfolding the Mind: The Unconscious in American Romanticism and Literary Theory.