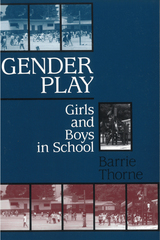 You see it in every schoolyard: the girls play only with the girls, the boys play only with the boys. Why? And what do the kids think about this? Breaking with familiar conventions for thinking about children and gender, Gender Play develops fresh insights into the everyday social worlds of kids in elementary schools in the United States. Barrie Thorne draws on her daily observations in the classroom and on the playground to show how children construct and experience gender in school. With rich detail,she looks at the "play of gender" in the organization of groups of kids and activities - activities such as "chase-and-kiss," "cooties," "goin' with" and teasing.

Thorne observes children in schools in working-class communities, emphasizing the experiences of fourth and fifth graders. Most of the children she observed were white, but a sizable minority were Latino, Chicano, or African American. Thorne argues that the organization and meaning of gender are influenced by age, ethnicity, race, sexuality, and social class, and that they shift with social context. She sees gender identity not through the lens of individual socialization or difference, but rather as a social process involving groups of children. Thorne takes us on a fascinating journey of discovery, provides new insights about children, and offers teachers practical suggestions for increasing cooperative mixed-gender interaction.
AUTHOR BIOGRAPHY
Barrie Thorne is a Professor of Sociology and Women's Studies at the University of California at Berkeley. She is a co-editor, with Barbara Laslett, of Feminist Sociology: Life Histories of a Movement, also published by Rutgers University Press.