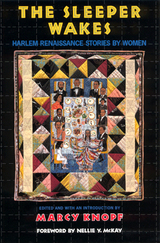 In recent years there has been an explosion of interest in the art and culture of the Harlem Renaissance. Yet this significant collection is the first definitive edition of Harlem Renaissance stories by women. The writers include Gwendolyn Bennett, Jessie Redmon Fauset, Angelina Weld Grimké, Zora Neale Hurston, Nella Larsen, Alice Dunbar-Nelson, and Dorothy West.

Published originally in periodicals such as The Crisis, Fire!!, and Opportunity, these twenty-seven stories have until now been virtually unavailable to readers. These stories are as compelling today as they were in the 1920s and 1930s. In them, we find the themes of black and white racial tension and misunderstanding, economic deprivation, passing, love across and within racial lines, and the attempt to maintain community and uplift the race.

Marcy Knopf's introduction surveys the history of the Harlem Renaissance, the periodicals and books it generated, and describes the rise to prominence of these women writers and their later fall from fame. She also includes a brief biography of each of the writers. Nellie Y. McKay's foreword analyzes the themes and concerns of the stories.

AUTHOR BIOGRAPHY
Marcy Knopf is a graduate of the University of Cincinnati.

Nellie Y. McKay is Professor of American and Afro-American Literature at the University of Wisconsin, Madison.