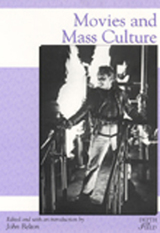 Movies and Mass Culture looks at the ways in which American identity shapes and is shaped by motion pictures. Movies serve not only as texts that document who we think we are or were, but they also reflect changes in our self-image, tracing the transformation from one kind of America to another. They assist audiences in negotiating major changes in identity, carrying them across difficult periods of cultural transition so that a more or less coherent national identity again emerges. Films thus help their viewers to span the gaps and fissures that cultural changes cause, allowing passage over any disjointedness that in some way might disrupt our sense of what we believe in as a nation. This volume examines this process, illustrating the ways in which films aided America's transition from an agrarian to an industrial economy; from a nation of producers to one of consumers; and from a community of individuals to a mass society.
AUTHOR BIOGRAPHY
John Belton is a professor of English at Rutgers University and author of Widescreen Cinema and American Cinema/American Culture.