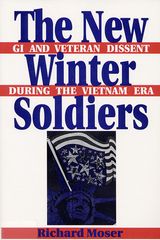 Richard Moser uses interviews and personal stories of Vietnam veterans to offer a fundamentally new interpretation of the Vietnam War and the antiwar movement. Although the Vietnam War was the most important conflict of recent American history, its decisive battle was not fought in the jungles of Vietnam, or even in the streets of the United States, but rather in the hearts and minds of American soldiers. To a degree unprecedented in American history, soldiers and veterans acted to oppose the very war they waged. Tens of thousands of soldiers and veterans engaged in desperate conflicts with their superiors and opposed the war through peaceful protest, creating a mass movement of dissident organizations and underground newspapers.

Moser shows how the antiwar soldiers lived out the long tradition of the citizen soldier first created in the American Revolution and Civil War. Unlike those great upheavals of the past, the Vietnam War offered no way to fulfill the citizen-soldier's struggle for freedom and justice. Rather than abandoning such ideals, however, tens of thousands abandoned the war effort and instead fulfilled their heroic expectations in the movements for peace and justice. According to Moser, this transformation of warriors into peacemakers is the most important recent development of our military culture.

The struggle for peace took these new winter soldiers into America rather than away from it. Collectively these men and women discovered the continuing potential of American culture to advance the values of freedom, equality, and justice on which the nation was founded.