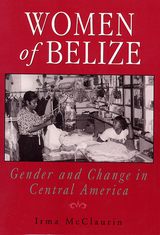 This engaging ethnography is set in the remote district of Toledo in Belize, Central America, where three women weave personal stories about the events in their lives. Each describes her experiences of motherhood, marriage, family illness, emigration, separation, work, or domestic violence that led her to recognize gender inequality and then to do something about it. All three challenge the culture of gender at home and in the larger community.

Zola, an East Indian woman without primary school education, invents her own escape from a life of subordination by securing land, then marries the man she's lived with since the age of fourteen--but on her terms. Once she needed permission to buy a dress, now she advocates against domestic violence. Evelyn, a thirty-nine-year old Creole woman, has raised eight children virtually alone, yet she remains married "out of habit." A keen entrepreneur, she has run a restaurant, a store, and a sewing business, and she now owns a mini-mart attached to her home. Rose, a Garifuna woman, is a mother of two whose husband left when she would not accept his extra-marital affairs. While she ekes out a survival in the informal economy by making tamales, she gets spiritual comfort from her religious beliefs, love of music, and two children.

The voices of these ordinary Belizean women fill the pages of this book. Irma McClaurin reveals the historical circumstances, cultural beliefs, and institutional structures that have rendered women in Belize politically and socially disenfranchised and economically dependent upon men. She shows how some ordinary women, through their participation in women's grassroots groups, have found the courage to change their lives. Drawing upon her own experiences as a black woman in the United States, and relying upon cross-cultural data about the Caribbean and Latin America, she explains the specific way gender is constructed in Belize.

AUTHOR BIOGRAPHY
Irma McClaurin is an assistant professor of anthropology at the University of Florida. She has published three books of poetry and is currently working on a biography of journalist Leanita McClain.