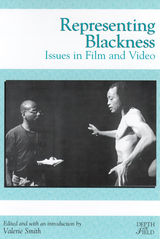 The essays in this collection provide a variety of perspectives on black representation and questions of racial authenticity in mainstream as well as African American independent cinema. This volume includes seminal essays on racial stereotypes, trenchant critiques of that discourse, original essays on important directors such as Haile Gerima and Charles Burnett, and an insightful discussion of black gay and lesbian film and video.

The contributors include Donald Bogle, Thomas Cripps, Jane Gaines, Nathan Grant, Stuart Hall, Tommy L. Lott, Wahneema Lubiano, Mike Murashige, Valerie Smith, James Snead, and David Van Leer. This volume is an important contribution to the Depth of Field series and should be indispensible for courses and individual scholars in film and multicultural studies. The book contains a mix of original and previously published pieces.

AUTHOR BIOGRAPHY
Valerie Smith is a professor in the English department at UCLA, where she also teaches film. She is the author of Self Discovery and Authority in Afro-American Narrative and editor of New Essays on Toni Morrison's "Song of Solomon".