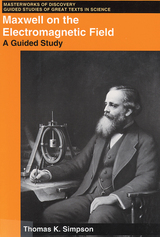 In this volume in the Masterworks of Discovery series, Thomas K. Simpson offers readers a chance to watch one of the greatest minds in physics hard at work. In three papers in mathematical physics written between 1855 and 1864, James Clerk Maxwell grappled with his formulation of the theory of the electromagnetic field.

This volume reproduces major portions of the text of Maxwell's classic papers on concepts that are key to both modern physics and the modern world. Through Simpson's engaginbg commentaries and notes and Anne Farrell's illustrations, readers with limited knowledge of math or physics as well as scientists and historians of science will be able to follow the emergence of Maxwell's ideas and to appreciate the magnitude of his achievement. This book includes a long biographical introduction that explores the personal, historical, and scientific context of Maxwell's book.