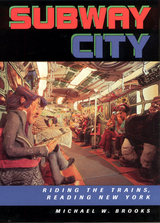 None of the world's great cities is as closely identified with its subway as New York. Its trains provide much more than just rapid transit. They give New Yorkers a powerful symbol of their metropolis, one that they use to express both their hopes and their fears for the urban future.

Subway City explores New York's transit system as both fact and metaphor. Brooks traces the development of the subway from its inception as the newest and most efficient public transportation system to its decline as an overcrowded and dangerous part of city life. The crowded cars gave Harold Lloyd material for comedy, fueled William Randolph Hearst's crusade against the Traction Trust, and convinced Lewis Mumford that the subway was a futile effort to solve the city's problems. Brooks explores films which have dramatized the dangers lurking below ground, and examines the infamous Bernhard Goetz shooting that made the subway a symbol of urban decay. More hopefully, he describes the Metropolitan Transportation Authority's station improvements and ambitious programs for Music Underground, Poetry in Transit, and Arts-in-Transit, as keys to the city's renewal.