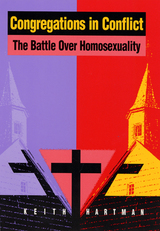 A Methodist church puts its minister on trial after he marches in a gay rights parade. A Quaker meeting struggles to decide whether to marry a lesbian couple. An entire congregation is thrown out of the Southern Baptist Convention for deciding that a gay divinity student had a sincere calling to the ministry, and an order of celibate monks comes out of the closet. An Episcopal priest blesses two same-sex relationships--then a closeted gay lawyer leads the charge to have him fired.

Homosexuality is the most divisive issue facing churches today. Like the issue of slavery 150 years ago, it is a matter that ignites passionate convictions on both sides, a matter that threatens to turn members of the same faith against each other, to divide congregations, and possibly even to fragment several denominations. Like slavery, it is an issue that calls up basic questions about what it means to be a Christian. How does one know right from wrong? Is the Bible fallible? Do good Christians always follow their church's teachings, or are they allowed to think for themselves on moral issues? And to what source does one finally look to determine what God really wants?

While many books have been written analyzing the scriptural and theological dimensions of the conflict, none has yet shown how it is being played out in the pews. Congregations in Conflict examines nine churches that were split by disagreements over gay and lesbian issues, and how the congregations resolved them.

Hartman explores in very readable prose how different denominations have handled their conflicts and what it says about the nature of their faith. He shows some churches coming through their struggles stronger and more unified, while others irrevocably split. Most importantly, he illuminates how people with a passionate clash of beliefs can still function together as a community of faith.

AUTHOR BIOGRAPHY
KEITH HARTMAN is a journalist and freelance writer whose work has appeared in numerous mainstream and gay publications. He lives in Atlanta, Georgia.