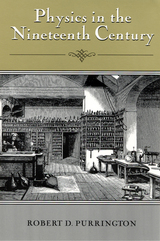 Putting physics into the historical context of the Industrial Revolution and the European nation-state, Purrington traces the main figures, including Faraday, Maxwell, Kelvin, and Helmholtz, as well as their interactions, experiments, discoveries, and debates. The success of nineteenth-century physics laid the foundation for quantum theory and relativity in the twentieth. Robert D. Purrington is a professor of physics at Tulane University and coauthor of Frame of the Universe.