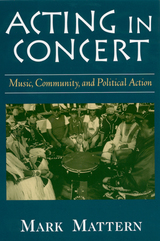 In this lively account of politics and popular music, Mark Mattern develops the concept of "acting in concert," a metaphor for community-based political action through music. Through three detailed case studies of Chilean, Cajun, and American Indian popular music, Mattern explores the way popular muisicians forge community and lead members of their communities in several distinct kinds of political action that would be difficult or impossible among individuals who are not linked by communal ties.

More than just entertainment, Mattern argues that popular music can serve as a social glue for bringing together a multitude of voices that might otherwise remain silent, and that political action through music can increase the potential for relatively marginalized people to choose and determine their own fate.
AUTHOR BIOGRAPHY
Mark Mattern is an assistant professor of political science at Chapman University, Orange, California.