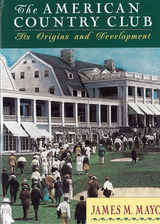 The American country club movement parallels the rise of suburbanization in the United States.  Its roots can be found in the exclusive city clubs and summer resorts of the nineteenth century; its growth reflects a desire for permanent and organized places where the wealthy could spend their leisure time.  By the late nineteenth century, mass transportation enabled the wealthy to escape the confines of the city, and suburbanization began.  Their pursuit of leisure—in the form of city clubs, spas, summer resorts, and elite sports—became the foundation for the country club.  Country clubs provided places where the elite could combine their interests in sports, the outdoors, and leisure while separating themselves from those they considered non-elite.  The American Country Club chronicles the social and economic evolution of this elite leisure landscape.

Some critics feel that the country club addresses a basic liberty of social choice whereas others view it as an unnecessary source of social discrimination.  Beyond these positions, James Mayo argues that our nation’s political economy is reflected in the country club, which simultaneously thrives as a business and provides social status for its members.