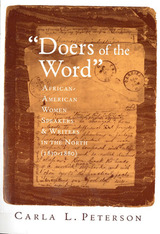 Adapting a verse from the Epistle of James —"doers of the word"— nineteenth-century black women activists Sojourner Truth, Jarena Lee, and Frances Ellen Watkins Harper, among others, travelled throughout the Northeastern, Mid-Atlantic, and Midwestern regions of the United States. They preached, lectured, and wrote on issues of religious evangelicism, abolition, racial uplift, moral reform, temperance, and women's rights, thereby defining themselves as public intellectuals.

In situating these women within the emerging African-American urban communities of the free North, Doers of the Word provides an important counterweight to the vast scholarship on Southern slavery and argues that black "Civil Rights movements" cannot be seen as a purely modern phenomenon. In particular, the book examines the ways in which this Northern black population, despite its heterogeneity, came together and established social organizations that would facilitate community empowerment; yet Peterson's analysis also acknowledges, and seeks to explain, the highly complex relationship of black women to these institutions, a relationship that rendered their stance as public intellectuals all the more bold and defiant.

Peterson begins her study in the 1830s, when a substantial body of oratory and writing by black women first emerged, and traces the development of this writing through the shifting political climate up to the end of Reconstruction. She builds her analyses upon Foucault's interdisciplinary model of discourse with an explicitly feminist approach, drawing upon sermons, spiritual autobiographies, travel and slave narratives, journalism, essays, poetry, speeches, and fiction. From these, Peterson is able to answer several key questions. First, what empowered these women to act, to speak out, and to write? Why, and in what ways, were they marginalized within both the African-American and larger American communities? Where did they act, speak, and write from?
AUTHOR BIOGRAPHY
CARLA L. PETERSON is a professor of English at the University of Maryland. Her previous publications include The Determined Reader: Gender and Culture in the Novel from Napoleon to Victoria.