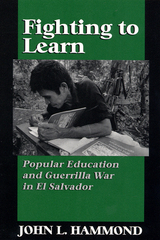 Popular education played a vital role in the twelve-year guerrilla war against the Salvadoran government. Fighting to Learn is a study of its pedagogy and politics. Inspired by Paulo Freire's literacy work in Brazil in the 1950s, popular education brought literacy to poor rural communities abandoned by the official education system and to peasant combatants in the guerrilla army. Those who had little education taught those who had none. Popular education taught people skills, raised the morale that sustained them in unequal combat, and stimulated the creation of an organizational network to hold them together.

Hammond interviewed more than 100 Salvadoran students and teachers for this book. He recounts their experiences in their own words, vividly conveying how they coped with the hardships of war and organized civilian communities politically to support a guerrilla insurgency. Fighting to Learn tells how poorly educated peasants overcame their sense of inferiority to discover that they could teach each other and work together in a common struggle.

First examining the Christian base communities through which popular education came to El Salvador, Hammond then discusses how guerrilla combatants, political prisoners, and refugees learned. He shows that education was both a pedagogical and a political practice: he discusses the training of completely inexperienced teachers, the linking of basic literacy skills with politics, and the organizing of communities. Fighting to Learn offers both a detailed account of an historical moment and a broad theoretical discussion of the relationship between education, community organizing, and the political process.

AUTHOR BIOGRAPHY
JOHN L. HAMMOND is a professor of sociology at Hunter College and the Graduate Center, City University of New York. He is the author of Building Popular Power: Workers' and Neighborhood Movements in the Portuguese Revolution.