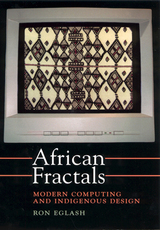 Fractals are characterized by the repetition of similar patterns at ever-diminishing scales. Fractal geometry has emerged as one of the most exciting frontiers on the border between mathematics and information technology and can be seen in many of the swirling patterns produced by computer graphics. It has become a new tool for modeling in biology, geology, and other natural sciences.

Anthropologists have observed that the patterns produced in different cultures can be characterized by specific design themes. In Europe and America, we often see cities laid out in a grid pattern of straight streets and right-angle corners. In contrast, traditional African settlements tend to use fractal structures-circles of circles of circular dwellings, rectangular walls enclosing ever-smaller rectangles, and streets in which broad avenues branch down to tiny footpaths with striking geometric repetition. These indigenous fractals are not limited to architecture; their recursive patterns echo throughout many disparate African designs and knowledge systems.

Drawing on interviews with African designers, artists, and scientists, Ron Eglash investigates fractals in African architecture, traditional hairstyling, textiles, sculpture, painting, carving, metalwork, religion, games, practical craft, quantitative techniques, and symbolic systems. He also examines the political and social implications of the existence of African fractal geometry. His book makes a unique contribution to the study of mathematics, African culture, anthropology, and computer simulations.
AUTHOR BIOGRAPHY
Ron Eglash recieved a bachelor of science degree in cybernetics and his master of science in systems engineering, and he worked at National Semiconductor as a human factors engineer. He returned to the University of California for a doctorate on the cultural analysis of science and technology from the Board of Studies in History in Conciousness, and after graduating recieved a Fulbright scholarship for research in ethnomathematics at the University of Dakar in Senegal. He is currently an assistant professor at Rensselear Polytechnic Institute.