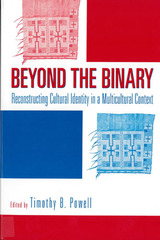 "Beyond the Binary offers a coherently presented collection of uniformly strong essays that speak to what is perhaps the most widely discussed, contested and conflicted topic in the study of US culture. It joins the growing body of work that seeks to move beyond identity politics and racial essentialism to formulate racial identity as a more complex series of social, cultural and political gestures." -Priscilla Wald, author of Constituting Americans: Cultural Anxiety and Narrative Form and Constituting Americans

Cultural studies have reached a theoretical impasse. As scholars continue to topple the previously entrenched concept of Eurocentrism, this field has fragmented into works covering many separate cultural enclaves. In the first wave of this "post-Eurocentric" scholarship, a binary model ensued, using the designations of "Self" and "Other:" i.e., black/white, gay/straight. This model, however, also has found disfavor. As a result, recent scholarship has focused on a single group studied in isolation.

What is needed is a new critical phase of reconstruction that will bring discussion of these disparate cultural enclaves back into a more organized, critical sphere. Researchers must have the necessary conceptual tools so they can study the ways in which cultures overlap, intersect, or else violently conflict with one another.

Beyond the Binary: Reconstructing Cultural Identity in a Multicultural Context addresses this theoretical impasse by proposing new critical models that fully engage the dilemmas posed by multiculturalism. Rather than becoming entangled in the polarizing rhetoric of the culture wars, these essays are firmly grounded in the lived perplexities of specific historical moments. One piece, for example, considers the cultural identity of "freaks" exhibited in P. T. Barnum's circus, the contested place of hemophiliacs within Queer Nation, and "white" working-class musicians who proudly proclaim themselves to be "black lesbians."

Beyond the Binary is meant to be read in its entirety as a many-voiced narrative dedicated to bringing the divisions within cultural studies back into contact with one another. By doing so, Powell ushers in a new era of multicultural analysis that recognizes the historical existence of racism, yet also acknowledges the dynamic fluidity of cultural identity.

AUTHOR BIOGRAPHY
Timothy B. Powell teaches English at the University of Georgia. He has published many articles on multiculturalism; he is also the author of a forthcoming title, Ruthless Democracy: A Multicultural Interpretation of the American Renaisance.
TABLE OF CONTENTS