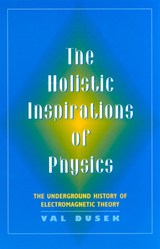 While many books have claimed parallels between modern physics and Eastern philosophy, none have dealt with the historical influences of both Chinese traditional thought and non-mechanistic, holistic western thought on the philosophies of the scientists who developed electromagnetic field theory. In The Holistic Inspirations of Physics, R. Valentine Dusek asks: to what extent is classical field theory a product of organic and holistic philosophies and frameworks?

Electromagnetic theory has been greatly influenced by holistic worldviews, Dusek posits, and he highlights three alternative scientific systems that made the development of electromagnetic theory possible: medieval Chinese science, Western Renaissance occultism, and the German romantic traditions. He situates these "alternative" approaches in their social context and background, and traces their connection with components of “accepted” physical science in relation to a number of social movements and philosophical theories.

Readers will learn of specific contributions made by these alternative traditions, such as the Chinese inventing the compass and discovering the earth's magnetic field and magnetic declination. Western alchemical ideas of active forces and "occult" influences contributed to Newton's theory of gravitation force as action at a distance, rather as a result of purely mechanical collisions and contact action.

Dusek also describes the extent to which women's culture supplied (often without credit) the philosophical background ideas that were absorbed into mainstream field theory.