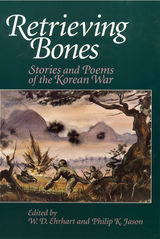 The Korean War was a major event in American history. It marked an abrupt end to the euphoria Americans felt in the wake of victory in World War II and turned out to be the harbinger of disaster in Vietnam a decade later.

Though three years of brutal fighting resulted in millions of casualties, the final truce line of 1953 corresponded almost exactly to the positions the opponents held when the fighting began. Back home, the returning veterans met with little interest in or appreciation of what they had endured. Consequently, literary responses to the Korean War did not find an eager readership. Few people, it seemed, wanted to read about what they perceived as a backwater war that possessed neither grand scale nor apparent nobility, a war that ended not with a bang, but a whimper.

Yet an important literature has come out of the Korean War. As we mark the fiftieth anniversary of the war, these writings are well worth our attention. Many of the twelve stories and fifty poems assembled in Retrieving Bones have long been out of print and are almost impossible to find in any other source. The editors have enhanced this collection by providing maps, a chronology of the Korean War, and annotated lists of novels, works of nonfiction, and films. In a detailed introduction, Ehrhart and Jason discuss the milestones of the Korean War and place each fiction writer and poet represented into historical and literary contexts.

Among the writers and poets are

W. D. Ehrhart, a poet and anthologist of the Vietnam War, is currently a research fellow of the University of Wales in Swansea.